This is a post to introduce a couple of probability concepts that are useful for machine learning. To make it more interesting, I am mixing in it some MonteCarlo simulation ideas too!

To see examples in Python we need first to introduce the concept of random numbers.

The English word stochastic is an adjective describing something that was randomly determined. It originally came from Greek στόχος (stokhos), meaning ‘aim, guess’.

On the other side, deterministic means that the outcome – given the same input – will always be the same. There is no unpredictability.

Randomly generated is a big area by itself, for our scope is enough to say that randomness is the lack of pattern or predictability in events. A random sequence of events therefore has no order and does not follow an intelligible combination.

Individual random events are by definition unpredictable, but in many cases the frequency of different outcomes over a large number of events is predictable.
And this is what is interesting for us: if I throw a die with six faces thousands of times, how many times in percent shall I expect to see the face number six?

Let’s see some practical examples with Python. As usual they are also available in a notebook.
We generate a (pseudo) random number in Python using the random library:

Generally, in applications such as in security applications, hardware generators are generally preferred over software algorithm.

A pseudo-random algorithms, like the Python random library above, is called pseudo because is not really unpredictable: the sequence of random numbers generated depends on the initial seed: using the same number as seed will generate the same sequence.

This is very useful for debugging purpose but means also that one needs to be very careful when choosing the seed (for example, choosing atmospheric signals or other noises).

We can use this property to generate deterministic numbers. If the seed is fixed, the number generated “randomly” will be always the same.

Before looking at what is the probability of an event, we define a function that simulates the roll of a six-faced die:

If E represents an event, then P(E) is the probability that E will occur.
A probability is a frequency expressed as a fraction of the sample size:

Example: a die has six faces: the space of the possibilities is six.
If I want to calculate the probability of getting the event 5 when rolling the die one time, I need to consider that there is one face with the number five on it therefore only one possible outcome favourable:

This is the frequentist definition.
Probability can be seen as the long-run relative frequency with which an event occurred given many repeated trials.
Empirically, let’s say I throw this die 1000 times and the face number five comes 125 times.The frequency observed for face six is 125/1000 = 0.125

An alternative is Bayesianism which defines probability as a degree of belief that an event will occur. It depends on the own state of knowledge, therefore is more subjective than frequency probability.

One of the most powerful techniques in any data scientist’s tool belt is the Monte Carlo Simulation. It’s super flexible and extremely powerful since it can be applied to almost any situation if the problem can be stated probabilistically.

Monte Carlo methods are a class of methods that can be applied to computationally ‘difficult’ problems to arrive at near-enough accurate answers. The general premise is remarkably simple:

The name refers to a famous casino in Monaco. It was coined in 1949 by one of the method’s pioneers, Stanislaw Ulam. Ulam’s uncle was reportedly a gambling man, and the connection between the element of ‘chance’ in gambling and in Monte Carlo methods must have been particularly apparent to Stanislaw.

A Montecarlo simulation of a die roll

We run now a simulation of a die roll and see what are the frequencies for each face of the die:

A and B are independent if knowing whether A occurred gives no information about whether B occurred.

Let’s define a function to model n rolls of a die, whereas each roll should be independent from the others.

These are independent events.

Now an interesting question would be:
What is the probability that both two independent events A and B occur?

Which is quite low.

For a six-sided die, there are 6^5 possible sequences of length five.
The probability of getting five consecutive six is 1 / 6^5, pretty low number. 1 out of 7776 possibilities.
Let’s look at a simulation to check this.

Remember that the theory says it will take on average 7776 tries.

A friend asked Pascal:
would it be profitable, given 24 rolls of a pair of dice, to bet against their being at least one double six?

it’s very close!
Again, we can run a simulation to check it:

The sampling table gives the number of possible samples of size k out of a population of size n, under various assumptions how the sample is collected.

One example:
one ball will be drawn at random from a box containing: 3 green balls, 5 red balls, and 7 yellow balls.

What is the probability that the ball will be green?

Instead of taking just one draw, consider taking two draws. You take the second draw without returning the first draw to the box. We call this sampling without replacement.

What is the probability that the first draw is green and that the second draw is not green?

Now repeat the experiment, but this time, after taking the first draw and recording the color, return it back to the box and shake the box. We call this sampling with replacement.

What is the probability that the first draw is green and that the second draw is not green?

Sampling with replacement – be careful

Say you’ve drawn 5 balls from a box that has 3 green balls, 5 red balls, and 7 yellow balls – with replacement – and all have been yellow.

What is the probability that the next one is yellow?

Yes, doesn’t matter if all previous five draws were ALL yellow balls, the probability that the sixth ball is yellow is the same as for the first draw and all other draws. With replacement the population is always the same.

Two teams, say the Manchester United (M.Utd.) and the AC Milan, are playing a seven game series. The Milan are a better team and have a 60% chance of winning each game.

What is the probability that the M.Utd. wins at least one game? Remember that they must win one of the first four games, or the series will be over!
Let´s assume they are independent events (in reality losing one match may impact the team’s morale for the next match):

Here is the Monte Carlo simulation to confirm our answer to M.Utd. winning a game:

Winning a game – with MonteCarlo

The two teams are playing a seven game championship series. The first to win four games wins the series. The teams are equally good, so they each have a 50-50 chance of winning each game.

If Milan lose the first game, what is the probability that they win the series?

Confirm the results of the previous question with a Monte Carlo simulation to estimate the probability of Milan winning the series.

That’s all for now.
Finally – to show how useful probability and MonteCarlo can be for many real problems – we can see how to estimate the value of the infamous PI.

Estimate the value of pi

Pi (or π) is a mathematical constant. It is perhaps most famous for its appearance in the formula for the area of a circle:

π is an example of an irrational number. Its exact value is impossible to represent as any fraction of two integers.
In fact, π is also an example of a transcendental number — there aren’t even any polynomial equations to which it is a solution.

Nonetheless obtaining an accurate value for π is not that difficult.
You can find a pretty good estimate of π using a Monte Carlo-inspired method:

Draw a 2m×2m square on a wall. Inside, draw a circle target of radius 1m.
Now, take a few steps back and throw darts randomly at the wall. Count each time the dart lands in the circle.
After a hundred throws, multiply what fraction of throws landed in the circle by the area of the square. There is your estimate for π. 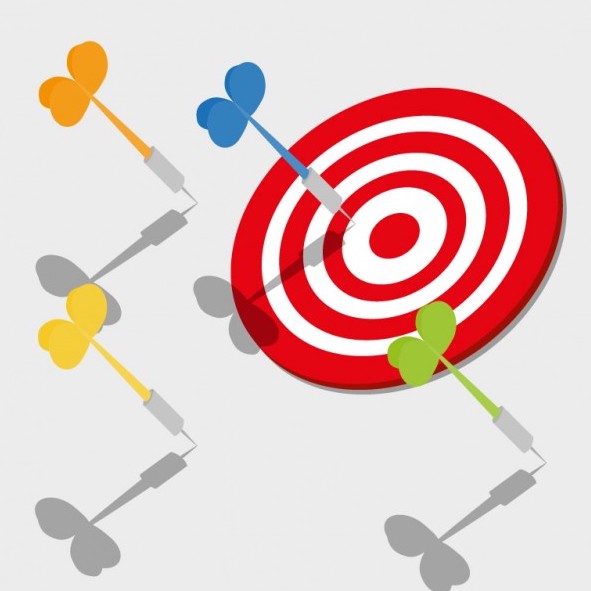 The circle’s area is about 78% that of the square, so about that percentage of darts lands inside the circle.
The reason this works is very intuitive.When sampling random points from a square containing a circle, the probability of selecting points from within the circle is proportional to the circle’s area. With enough random samples, we can find a reliable estimate for this proportion, p.

As we know the area of the square and have an estimate for the proportion of its area covered by the circle, we can estimate π. Simply multiply p×4.

The more random samples we throw, the better the estimate *p* will be. However, the gain in accuracy diminishes as we take more and more samples.

More needles you throw more precise will be the PI value.

We can do better and go on – increasing the number of needles at each trial – until we get the wished precision.

Monte Carlo techniques are often invoked when we need to do repeated sampling to determine results. Often that means that the problem cannot be simply solved mathematically. For instance, when the effect of one step in the calculation changes the possibilities in the next steps.