The book (and later a movie) Moneyball by Michael Lewis tells the story of how the USA baseball team Oakland Athletics in 2002 leveraged the power of data instead of relying on experts.
Better data and better analysis of the data lead to find and use market inefficiencies.

The team was one of the poorest in a period when only rich teams could afford the all-star players (the imbalance in total salaries being something like 4 to 1).
A new ownership in 1995 was improving the team’s wins but in 2001 the loss of 3 key players and budget cuts were bringing a new idea: take a quantitative approach and find undervalued players.

The traditional way to select players was through scouting but Oakland and his general manager Billy Bean (Brad Pitt in the movie…) selected the players based on their statistics without any prejudice. Specifically, his assistant – the Harvard graduate Paul DePodesta looked at the data to find which ones were the undervalued skills.

A subset of the data is stored in a CSV file that I put on my GitHub account and can be read into a Python data frame:

The feature named ‘W’ is the wins in the season ‘Year’ and the feature ‘Playoffs’ is a boolean value (0 = didn’t make to the playoffs; 1 = did make).

The first step was to understand what was needed for the team to enter the playoffs and he judged from the past seasons that it takes 95 wins to be sure to make to the playoffs. 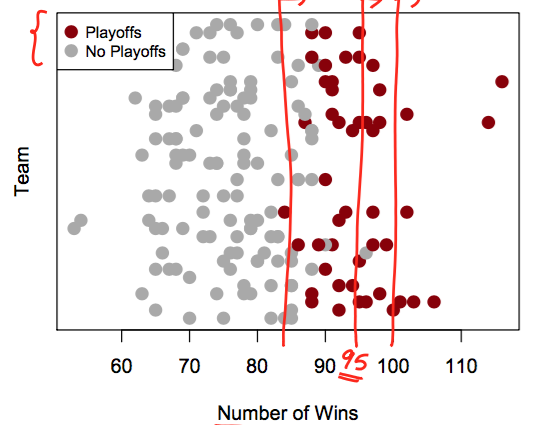 To win games a team needs to score more “runs” than their opponent but how many? DePodesta used linear regression to find out. We can see how.

Our output would be the number of wins W and we want to see how it depends on the runs difference RD:

This is a linear regression and the beta parameters can be estimated using the Gradient Descent algorithm, as in this code snippet:

And this is the result:

The goal of a baseball team is then: make to playoffs < win at least 95 games < score at least 135 more runs than the opponent.

Finally, they used multivariate regression to check which baseball statistics were significantly to increase the runs scored and decrease the runs allowed and their conclusion was these two:

They looked for players with statistics which would improve their average team’s and in 2002 the Oakland made to the playoffs winning 103 games, scoring 800 runs and allowing 653 (the difference is 147).

This is my personal blog, where I write about what I learned, mostly about software, project management and machine learning. Why this name? The blog should help me to navigate into the future using (and not forgetting) the past experiences. From Europe to the world.